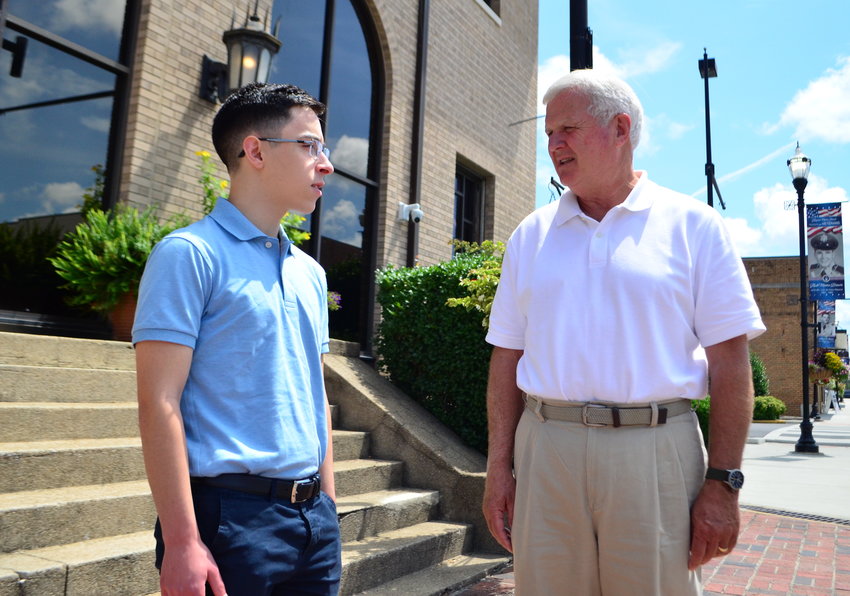 “We’ve got to keep a high level of community interest involvement. We can’t let our people get to where we’re complacent” Brent McCarver says as he leans forward over his desk, making slight hand gestures. Born in Athens, Alabama, but living in Jasper, McCarver lived in and around Athens and Russellville in North Alabama until his mid-twenties. He went to college in the area, but had never been to Jasper until he was 25 and working on a political campaign.

After majoring in Public Administration in college, McCarver had a number of political jobs, working for campaigns, congressional offices, and related work. “You work on those campaigns and you move around with them,” Brent told me. He ended up meeting Dana, his wife when he came to Jasper on a campaign in early 1998.

“The day I said ‘I do’ my intention was to leave Jasper… but my wife had no intention of leaving Walker County. I never intended to be here – I didn’t like it when I was here working, didn’t like it during the campaign, but it kind of grows on you,” Brent said.

He moved to Jasper shortly after marrying, but spent the next 10 years working in surrounding counties. There just wasn’t a market for skilled labor in town, so he worked in Cullman. His only tie here was family at that time. Jasper was, and continues to be, a largely trade-oriented city, he explains. “It’s not a negative, but with a college degree there was nothing for me to do here. If you could drive a bulldozer or weld, there was a job.”

McCarver arrived in Jasper as coal mining was leaving the town. The main street area was languishing, with only one restaurant, and most of the storefronts were empty. At that time, I-22 came only to the Walker County line, and picked up again far into Jefferson County. According to McCarver, “All that was down here [downtown] was attorneys, courthouse personnel, and banks.”

When asked about how Jasper has changed since he came to Jasper, Brent defaults to talking about how the City shrunk as the coal industry left Walker County. “I’ve been here to watch it completely die of… retail, and even the community… it really went through a drying up period,” he said.

In the last five to ten years, Jasper has changed a lot, with a revitalized downtown area bringing new life to the city. The obvious explanation is the expansion of I-22 through Jasper and the County, but that tells only half the story. Brent attributes much of this change to the foundation of Jasper Main Street, a Main Street nonprofit focused on downtown renewal, and the efforts of its Director, Mike Putman. Along 19th street in Jasper, you can see the difference. There are murals all along it, from the city gate in the east to the railroad tracks west. And there are a number of businesses and restaurants, both new and old, that benefit from renewed foot traffic in the area.

Main Street has also coincided with another renewal within Jasper—a civic renewal, one that both Putman and McCarver are a part of. Brent now works in City Hall, officially as the Revenue Compliance Officer. Unofficially, he’ll tell you: “The truth of the matter is that what the mayor wants, that’s what I do.”

Three years ago, David O’Mary was elected as city mayor, marking a change in Jasper. During  his tenure, the city has seen a tremendous amount of change, in both an administrative and civic sense. The last few years have seen both new infrastructure projects and new manufacturers come to Jasper, alongside a new push for downtown renewal.

Yet to construe all this as the work of a mayor would diminish the reality behind Jasper’s recent growth. Mayor O’Mary’s election coincided with a wave of community revitalization. This is just part of a broader trend in which people from outside of Jasper have invested their time and efforts in improving the community. Brent listed off a number of people who had been in Jasper for 20, 30 years and had made a significant change despite being from other parts of the County or other counties entirely.

Brent himself, as mentioned before, wasn’t very invested in Jasper when he first came. But as he spent more time in Jasper, he came to realize that Jasper had a lot of potential, even alongside its declining population and weakening economy. With his background in Public Administration, Brent came to realize how he could contribute to Jasper himself: “I just kept sitting around saying that’s not right, that should be done better, there’s no reason for that to happen. I felt like I had the skills to where I could help Jasper. And now it’s my home.”

Brent met David O’Mary working at Synovus Bank, and worked with him on his campaign to be elected Mayor of Jasper. They were both a part of the new energy people have put into Jasper that has led to its rebirth these last five or ten years. This alone isn’t enough though, McCarver says. What Jasper needs to focus on in the future is cultivating a sense of civic responsibility and interest in the next generation: “If you don’t have the generation behind stay committed it just sort of stays the same. Nobody young, nobody innovative comes in, and that’s what worries me. How do we keep the foot on the gas, how do we ensure that people stay active and that people will come in to Jasper and do the right things?”

The photo of Vaughn was taken by Ms. Nicole Smith for the four-piece series on the 2019 Walker County Interns featured in the Daily Mountain Eagle.