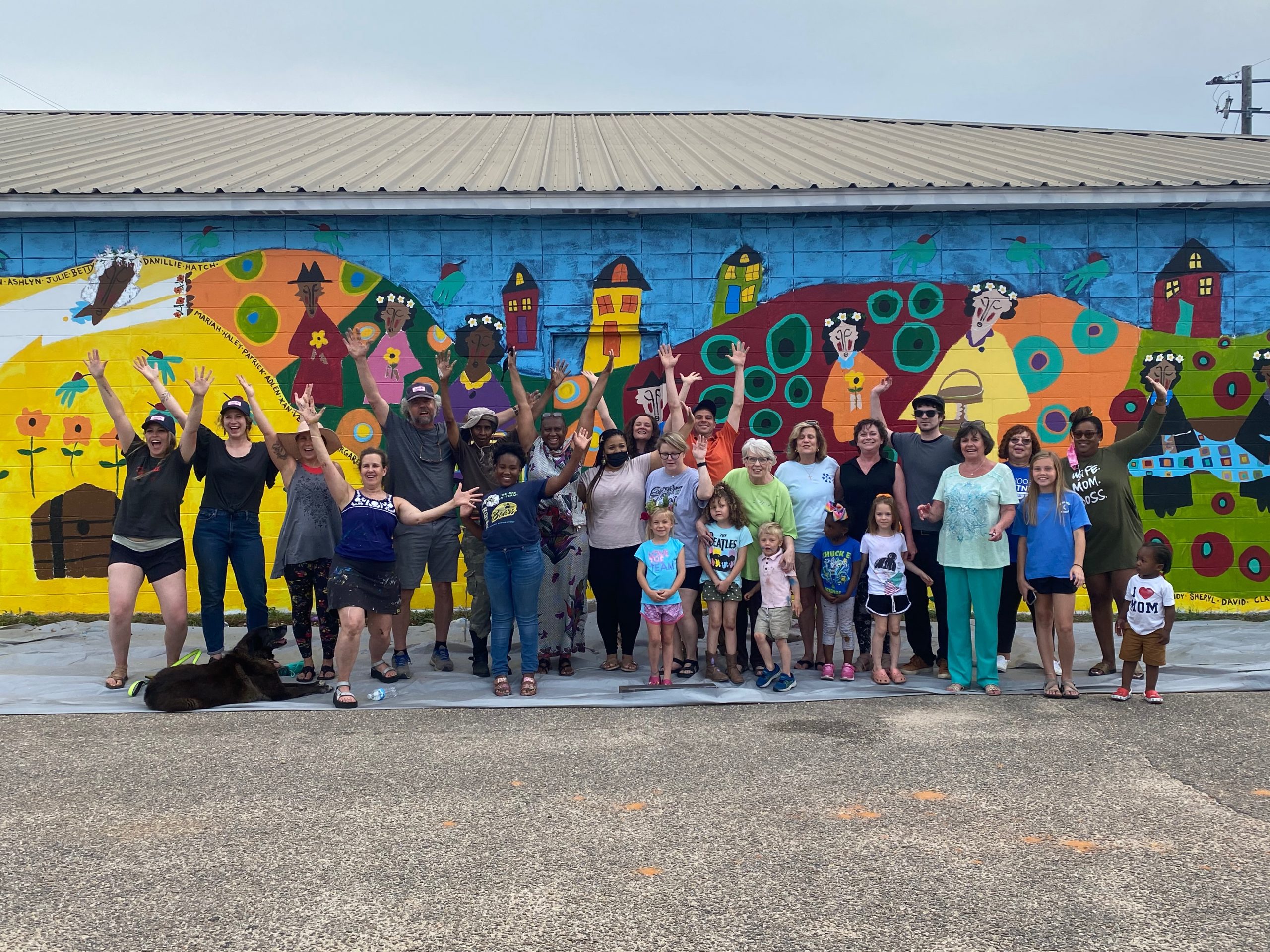 Jean O’Connor-Snyder intern Lauren Landers explores how the community of Camden celebrates the collective history of the Black Belt region through art.

The walls of Camden, Alabama, got a lot brighter as citizens came together to add a new treasure to the historic downtown on Mother’s Day weekend.

On the corner of Union Street and Claiborne Street, community members gathered together, bringing life to the “Revolution of Joy” project led by Tres Taylor, an artist working to celebrate the culture, history, and authenticity of the unique towns in the Black Belt region.

Taylor’s mission is to add murals throughout Alabama’s Black Belt. Each of his murals is unique and inspired by each town’s history and culture.

About a week before the mural was to be created, Taylor arrived in Camden to speak about his plans with Kristen Law with the Black Belt Treasures Cultural Arts Center and Betty Anderson.

It did not take long for Taylor to realize what story needed to be told after he met Anderson, the owner of the Shoe Shop Museum in downtown Camden.

Anderson said, “After lunch, I brought him to my museum. We ended up talking to nearly six hours.”

He was so inspired by her stories that it erased all the original plans he had for Camden’s mural, and he created another vision inspired by Anderson.

The week before the mural painting, citizens were invited to join in helping paint the mural, even if it was just adding a few strokes.  Anderson was one of the 91 community members who came and contributed to the mural.

In three days, with the help of all the local contributing artists, the wall was brought to life, catching the eyes of all who passed.

The vibrant colors in the mural reflect Camden’s unique treasures, including the sunflowers lining the bottom of the wall.  The mural features a treasure chest representing Black Belt Treasures and a quilt in honor of Gee’s Bend quilters. The names of all those who helped line the wall as well.

The mural is sparking conversations in Camden about what the next project can be, inspiring pride in what can be achieved with the community comes together.

Anderson said she hopes that all the positive conversation about the project will spark even more enthusiasm for the next one.  She said, “Things like this benefit communities like Camden because they spark more community involvement, while also adding something to our town.”

Anderson said she was overjoyed with the turnout for the mural project. She said, “The highlight of my weekend was my granddaughter coming to help. Having her there was so special to me.”

Like the mural, Anderson herself inspires by sharing her love for the town, its people, and the history and culture surrounding it.

Her Shoe Shop Museum is located in the same building where her father operated his shoe shop many years ago. Her museum is set up into four sections with one dedicated to her father and his work running the shoe shop.

The other three sections reflect the history and culture of Wilcox County that Anderson either experienced or learned about. Anderson said her museum and the mural can help both residents and visitors celebrate the history of Camden and the Black Belt.

Anderson said her father was the first black business owner in the area. Her mother helped push the reopening of the ferry traveling from Gee’s Bend to Camden, and she herself marched in the Selma to Montgomery March.

Anderson recalled, “My shoes were worn out during the march. They got so bad there was a hole in the sole of my shoe.” Anderson explained that a lady saw her shoes during the march and patched them up with a Cracker Jacks’ box. That very shoe now hangs on the wall at her museum.

Lauren Landers is a senior at Auburn University who will graduate with a Bachelor of Social Work from the College of Liberal Arts in December 2021.

Every contribution we receive now until the end of 2021 will be matched dollar-for-dollar up to $100,000.

Make your gift today and double your impact!