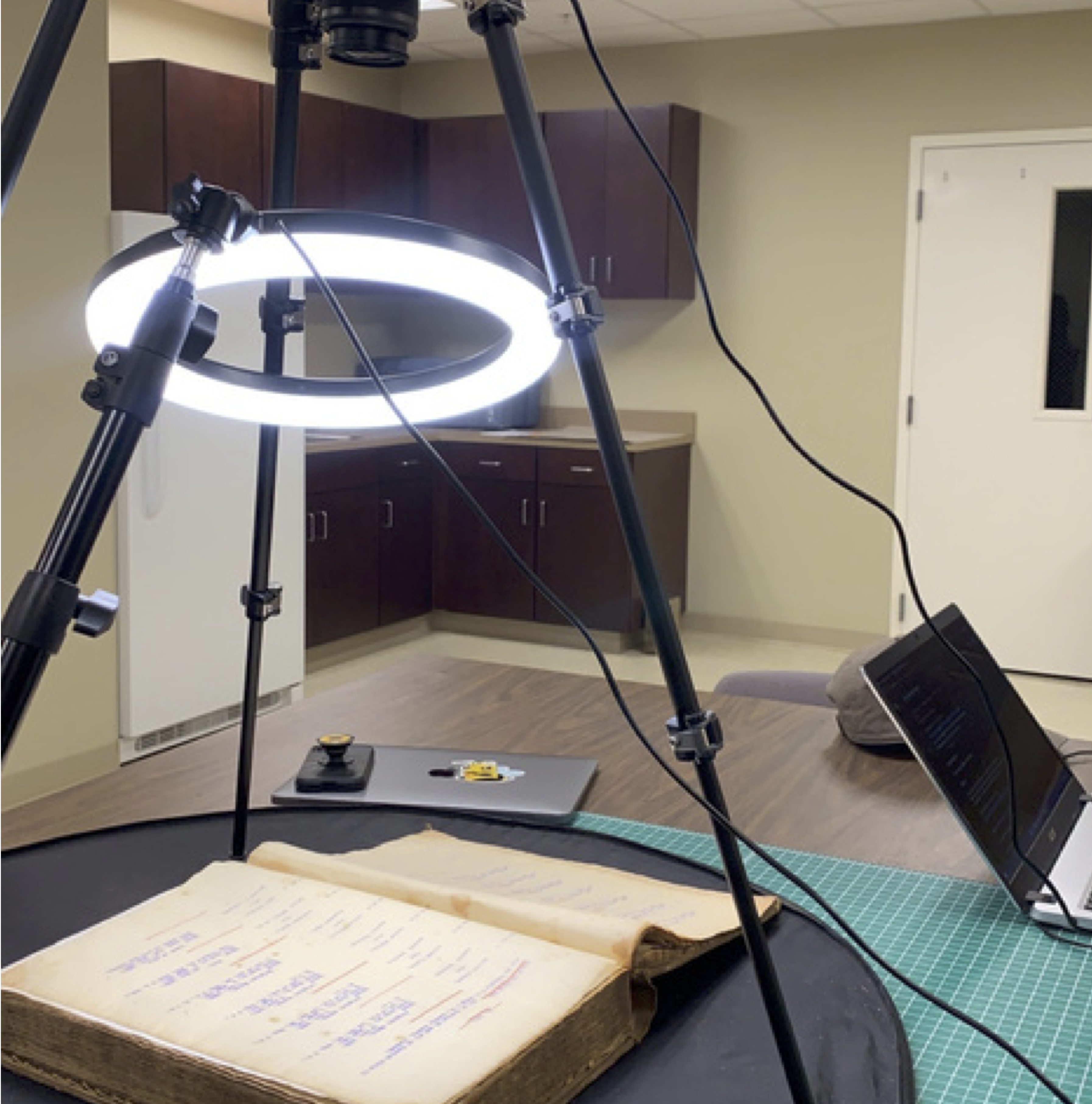 In partnership with the Mobile Creole Cultural and Historical Preservation Society and the Doy Leale McCall Rare Book and Manuscript Library, the University of South Alabama JOIPs stepped back in time with their summer project.

This article was written by the University of South Alabama Honors College Digitization Team and published with their permission. Members of team were Luke Love, Carolyn Adams, Dejah Davis, Chelsea Cook, and Abigail Bergdolt. (June 2022)

“It has been said that, at its best, preservation engages the past in a conversation with the present over a mutual concern for the future.” – William Murtagh, first keeper of the National Register of Historic Places

Community Journalism is locally-oriented media that reports on events relevant to regional viewers and promotes a greater, more intimate understanding of its micro communities and minority groups. At the core of community journalism is the formal and informal interaction between the community and its citizens, known as civic engagement. The David Mathews Center for Civic Life is a nonprofit organization committed to fostering the skills and habits necessary to encourage effective civic engagement. The Mathews Center implements their mission by founding programs that create immersive civic learning opportunities throughout the state of Alabama. The Jean O’Connor-Snyder Internship is a program that gives college students the chance to engage in community-based projects that help transform them into active and influential members of their community. Through this internship, we were able to digitize over seven property ledgers from the nineteenth century for the Mobile Creole Cultural and Historical Preservation Society (MCCHPS). Digitization can be defined as a series of activities that result in the creation of a high-quality digital image of old, fragile resources to allow the public better accessibility. The process of digitization not only preserves materials but allows old documents to be utilized with ease. The digitization of the property ledgers for the MCCHPS allows for community journalists to easily learn about the Creole residents of Mobile, Alabama in the late nineteenth and early twentieth century.

The word Creole was originally used in the sixteenth century to describe a person born in the Americas but who was not wholly indigenous to the area. Creole peoples were often mixed-race, encompassing European, African, and Native American ethnicities. The Gulf Coast regions of Louisiana, Mississippi, Alabama, and Florida were home to many Creole communities, predominantly colonized by France and Spain. After the Louisiana Purchase, however, the Creole identification grew in importance. For free Creoles of color, this distinction provided community and protection from slavery and the Antebellum South. White Creole populations, who were predominately Catholic, also found solace and cultural preservation from the growing English speaking protestant Anglo-Saxon settlers. Creoles of all colors fostered relations with one another during this time and found ed communities separate from the rest of the country. However, after the end of the civil war, the Creole identification became hindered by Jim Crow Laws. As people of color, Creoles of color were subjected to the same persecutions and limitations as other African American communities. Creole families of color began to migrate to other parts of the United States. White Creole populations found themselves integrated with Anglo-Saxon communities and segregated from their fellow Creoles of color. The once thriving Creole communities fell prey to the divisive environment of the Jim Crow South, and many people lost touch with their heritage. For the MCCHPS, digitization is an essential part of reconnecting individuals with their Mobile Creole heritage. Often times this is done when families are researching their own genealogy.

The digitization process was completed with photography equipment and software connected to a computer and hard drive. A Canon EOS M50 Mark II camera was utilized to take pictures of the historical documents, while a ring light was placed directly below the camera to illuminate the pages for better readability. A three-terabyte hard drive was connected to store the images of the property ledger books in JPEG format. The photographs were taken and transferred to the hard drive using the software digiCamControl. DigiCamControl is a photo-taking software that easily transfers photos to computer files and external hard drives. The photos in the JPEG format from each ledger book were then compiled and converted to a PDF file which will be made available on the MCCHPS website for download. Through this easy-to-access download, the genealogy of Creole families can be confirmed by family names found in the property ledger books.

Throughout the digitization process, we were able to work intimately with seven of the Mobile property ledgers provided to us by the MCCHPS. Though the ledgers were not in the best condition, they did reveal pertinent information about the port city. Within the books were several maps, court documents, and dates which helped recreate a vision of Mobile in the nineteenth century. Many of the maps listed popular streets in downtown Mobile, which enables individuals to trace their Creole genealogy with the use of last name and property deeds. The legal documents within the ledgers also outline the price the citizen paid for their property, as well as who inherits the land. Furthermore, the legal documents also referenced the Alabama Supreme Court who occasionally ruled on land properties mentioned in the ledgers. While we worked and discovered these details as a team, each intern had a unique experience and took away individual lessons and perspectives that can be applied to their future career fields.

The group of interns digitizing ledgers on behalf of the MCCHPS consisted of five students who attend the University of South Alabama. Chelsea Cook is a senior studying Anthropology and Museum Studies. The Jean O’Con nor-Synder Internship not only allowed her to dip her feet into the museum field but also provided her the opportunity to learn about the city of Mobile and the Creole community on a more intimate level. Abigail Bergdolt is a 26-year-old senior and currently earning a double major in Emergency Medical Services and History. This internship has given her insight into the local Creole communities and provided the opportunity to further her skill set and passion for community services and civic engagement. Luke Love is a junior on the pre-med track with a concentration in history. This internship has provided him with the opportunity to collaborate with influential leaders in the Mobile Creole community. These leaders, including Karlos Finley and Tracy Neely, have demonstrated to him the value of oral and community history. Dejah Davis is a junior who is majoring in Psychology. Throughout the internship, Dejah found the numerous maps in the ledgers to be interesting as it covered many important time periods in Mobile Creole history. Carolyn Adams has received her B.A from the University of South Alabama where she majored in English with a concentration in creative writing and a minor in History. Carolyn’s involvement as a Delta Fellow working with the Mobile Creole and Cultural and Historical Preservation Society allowed her to develop her civic engagement skills by learning from an organization that seeks to elevate the voices of the Creole community.

We want to express our gratitude to the Jean Snyder-O’Conner Internship Program (JOIP Intern), funded by the David Mathews Center for Civic Life, for the opportunity to collaborate with University of South Alabama’s Honors College and the Mobile Creole Cultural and Historical Preservation Society to digitize nineteenth century ledgers in the Doy Leale McCall Rare Book and Manuscript Library. A special thank you to Tracy Neely, the president of the MCCHPS, for providing the team with the ledgers and demonstrating the importance of the Creole heritage in Mobile. Being involved with the local Creole community in Mobile helped the team of interns gain insight into the value of preserving local history and the importance of making rich resources accessible for future generations.

The above article was written by Chelsea Cook and published with her permission on behalf of the Honors College Digitization Team consisting of Lake Love, Carolyn Adams, Dejah Davis, Chelsea Cook, and Abigail Bergdolt.