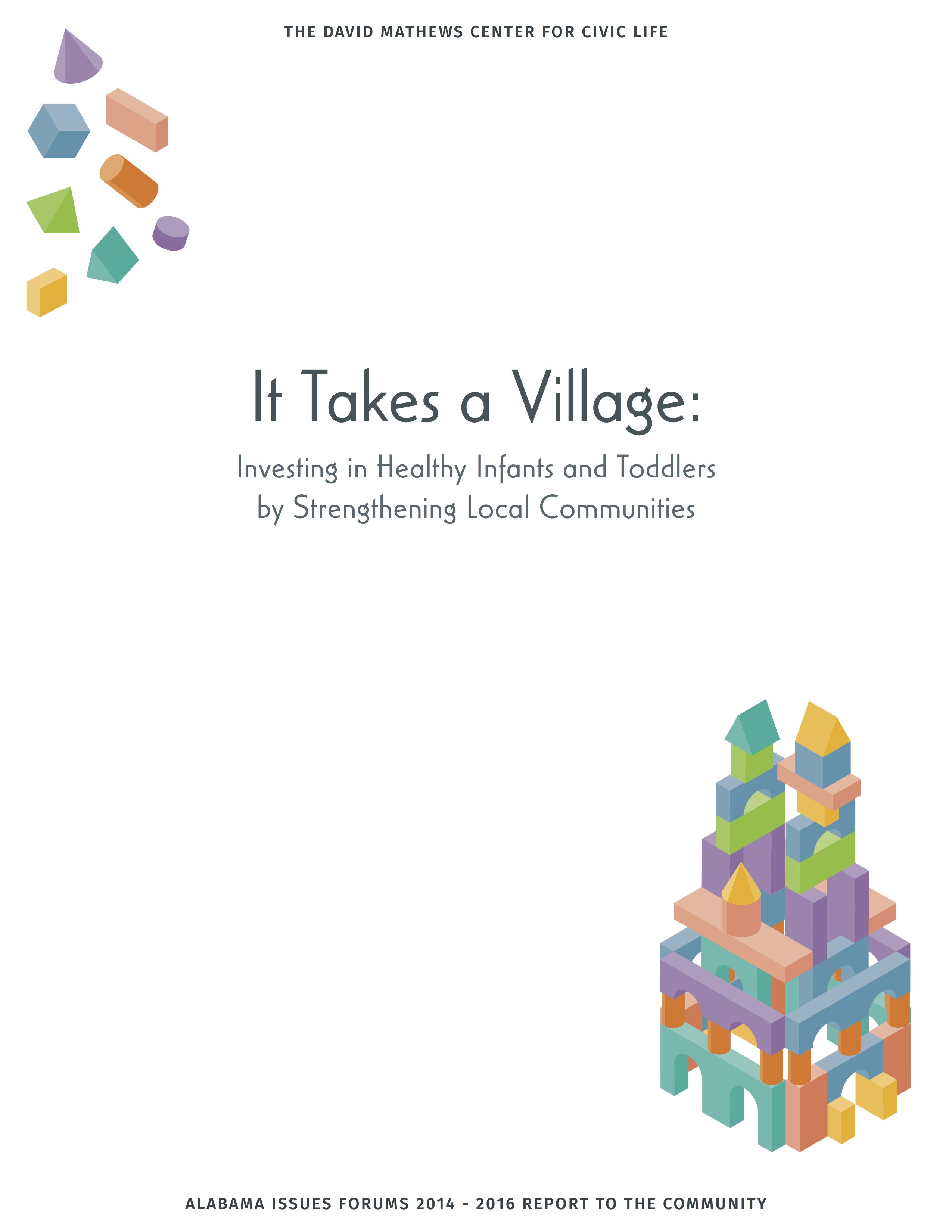 The David Mathews Center for Civic Life has released the concluding community report for the Minding Our Future: Investing in Healthy Infants and Toddlers forum series, which included over 1,000 attendees at 56 forums convened in 48 Alabama counties.

The report, entitled It Takes a Village: Investing in Healthy Infants and Toddlers by Strengthening Local Communities, utilized data from post-forum questionnaires, recorded notes, and program evaluations to capture participants’ reflections on how parents, caregivers, communities, and institutions can better invest in the formative first three years of the youngest Alabamians’ lives.

The Minding Our Future: Investing in Healthy Infants and Toddlers issue guide, created with Dr. Ellen Abell of Auburn University, offered information gathered from the National Center for Children in Poverty, the National Scientific Council on the Developing Child, The Annie E. Casey Foundation, as well as numerous academic researchers of maternal, infant, and child well-being. Key findings conclude that of the 182,171 infants and toddlers living in the state as of 2014, 81% live in either low-income families or families of poverty. Of Alabama mothers with infants, 60% are in the labor force, while 13% of children under 3 live in families with parents who are unemployed. Also noted was that 39% of children under 3 live with a single parent.

Overall, Alabama ranks 44th in the nation on child well-being. According to the most recent (2015) data report Alabama Kids Count, a publication of VOICES for Alabama’s Children, while 96% of children are covered by some form of health insurance, one-quarter of pregnant women in the state do not receive adequate prenatal care. Additionally, while overall low-weight births and preterm births have decreased, these two factors remain a leading cause of the infant-mortality rate which has remained steady at 8.6 deaths per 1,000 live births. It is with consideration of this information that the David Mathews Center developed the Minding Our Future issue guide, which prompted Alabamians to consider approaches for better investing in healthy infants and toddlers in their communities.

“Forums from the Gulf Coast to the Shoals brought everyday Alabamians together to work through complex issues, identify common ground, and take collective action. Forum participants deliberated through meaningful solutions for addressing our state’s most pressing challenges to investing in healthy infants and toddlers. This report shares the common themes that emerged from those productive, deliberative conversations.”

The approximately 600 surveys collected from forum attendees at the conclusion of forums revealed that 73% of attendees reported thinking differently about investing in healthy infants and toddlers after participating in this forum. In addition, 70% of attendees said they had talked about aspects of investing in healthy infants and toddlers in the forum which they had not considered before.

The Minding Our Future forum series provided the opportunity for Alabamians to offer insight and suggestions for how communities can address issues of infant and toddler well-being. Additional survey findings and the themes that emerged in forum deliberation can be found in the It Takes a Village: Investing in Healthy Infants and Toddlers by Strengthening Local Communities report.

We invite Alabamians to examine the findings in the report and continue the conversation in their communities.