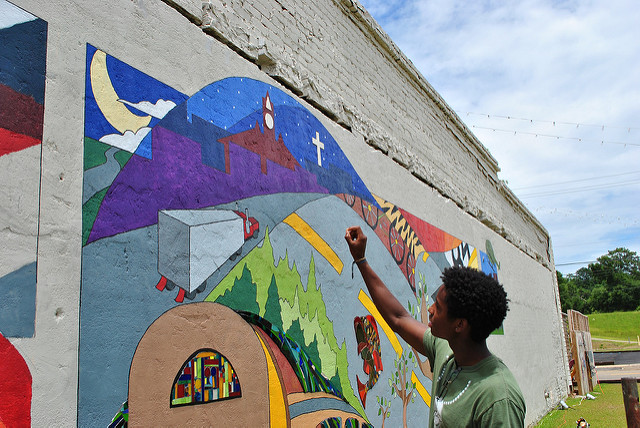 Moore, a soon-to-be graduate of Auburn University and JOIP alumnus recalls his first moments in Elba, where, he insists, the first moments are the most important:

“The first day – you walk outside and you think What do I do? Where do I start?”

“It’s like politics those first two weeks – you’ve got to get out and shake hands and get people on your side and really get to know them,” he says. “I just knew that I didn’t want to be down there for three months just twiddling my thumbs. I wanted to make something happen.”

And he did, in fact, “make something happen.” That something is a larger than life mural highlighting the history and assets of Elba, which Moore he helped design and create with local residents.

One thing about his JOIP internship that wasn’t new was living in a “small town.” Although he was born in Huntsville, Moore’s family relocated to Taft, Tennessee–a small town of approximately 2,000–when he was still a child.

“It was really small and I spent the golden years of my childhood there,” he remembers fondly. “My character, my foundation was created there.”

“Taft wasn’t very much smaller than Elba, so [adjusting to the size] wasn’t a big issue, but it was comforting to see how close knit Elba is,” Moore continues. “It’s a small town but it has a big heart.”

When asked about how he became interested in the JOIP internship, Moore laughed before divulging, “I feel so shallow saying this but at the time I was a freshman and the jobs I had were on campus, the minimum wage is $8 or something, and you can only work 20 or so hours a week. When I discovered Living Democracy, the first thing on my mind was dollar signs, and so I thought, ‘Yeah, I can do that.’”

However, as he went through the application process and realized the magnitude of the internship’s commitment, the concept further piqued his interest. According to Moore, the summer in Elba not only refined how he saw himself, but what plans he would consider for his future.

He mentions that in addition to being homeschooled, he was also geographically isolated. “[Civic engagement] didn’t really happen until I got to college, and Living Democracy jumpstarted that.”

“One of the things I learned is that I’m not an expert in anything, but I’m okay at just about everything. But it’s funny when you get down there you become the expert when there’s no one else who knows about a specific task,” he says. “You really learn how to bring people together because you can’t do this by yourself. “

“You have to get people to donate their time and services, but that whole town was on board,” Moore testifies. “One thing that made my time really effective is that Elba is a very small town, and is just one big family. It’s a wonderful place.” He also asserts that his job was made much easier because of the “moving vehicle” of local nonprofits like Restoration 154, which aims to revive Elba through 154 improvement projects.

Regarding long-term goals, Moore plans to pursue a number of professional interests in the coming years.

“I have two halves for how I see my character and where I’m going. There is the public ‘this is what I want to do, this is what I’ve been trained to do, people expect me to do this’ – and that would be writing,” says Moore. “And then another side of me wants to open up a t-shirt shop,” he continues, explaining how his part-time job at the Auburn screen-printing and t-shirt shop Stamp, as well as his father’s own experience in t-shirt design, sparked a personal interest.

However, he isn’t ruling out the possibility of working in civic life.

“Living Democracy came along and just kind of happened,” he says. “Because of that experience I’m sort of interested in politics down the road – engaging the community and coming up with [projects].”

When prompted for advice for future JOIP interns, Moore says, “Everyone has their methods, but usually I start by finding a group you can always go back to. You find those [groups] in churches. I recommend spending a lot of time in different churches because that’s where people come together,” he explains.

“When you get there that first day you will be in open water thinking, ‘Which way do I swim now?’ Just overcome that,” he encourages.

“The first two weeks are always going to be the worst part, because nothing is off the ground yet, but if you get through those first two weeks and are still excited, you can just ride that wave until the end.”