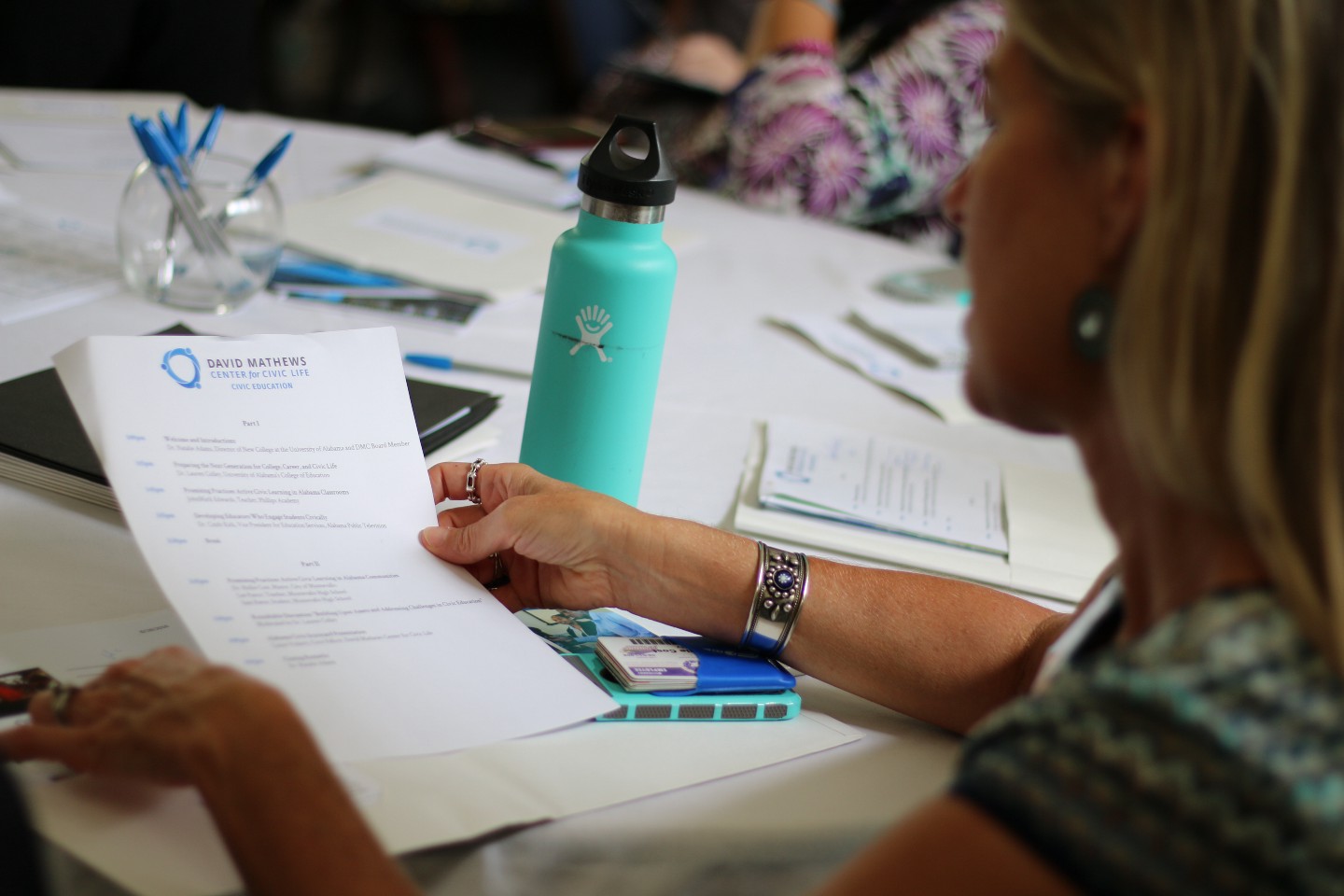 The David Mathews Center for Civic Life held its Inaugural Civic Institute at the American Village on August 18th, followed by a celebratory dinner marking its tenth year as an organization.

The Civic Institute was an all day event, kicking off the morning with a riveting panel discussion featuring Alabamians who are making a difference in their communities. Panel members included K.A. Turner of Alabama Media Group, Laurie Chapman and Justin Maddox of Restoration 154, Marian Royston of Randolph County Youth Development, Dr. Gerald Johnson of Spirit of Democracy, Mayor Hollie Cost of Montevallo, and Sam Reece of Montevallo’s Junior City Council.

Following the panel, Chief District Judge Keith Watkins of the Middle District of Alabama delivered a luncheon keynote speaking to the importance of civic education in the new millennium.

“There may have been a revolution and we missed it…”

…Watkins said during his address discussing the power of the citizen and the importance of critical thinking in active citizenship. Afterwards, leaders from around Alabama and the country came together for an afternoon of workshops aimed at strengthening civic skills and growing opportunities for communities to engage. The workshops included “Civic Engagement 101,” “Civic Education,” and an introduction to the DMC’s upcoming forum series entitled, “What’s Next, Alabama?”

The Civic Education workshop highlighted successful strategies for bringing civic engagement into the classroom, and featured students and teachers who have participated in Montevallo’s Students’ Institute.

“This Alabama Issues Forum series is unlike anything we’ve done before; the series will take place over the course of two years, and hold three forums in each community,” said DMC Assistant Program Director Justin Wayne Lutz.

The evening culminated in a formal dinner celebrating the tenth anniversary of the DMC’s founding. The evening began with the screening of a video honoring Dr. David Mathews’ legacy of leadership and the years of hard work that culminated with the founding of the DMC.

The namesake of the DMC’s Jean O’Connor-Snyder Internship Program (JOIP) was also honored during the dinner. Jean O’Connor-Snyder was celebrated throughout the evening with a portrait unveiling and a video tribute. “Mrs. OC,” as friends called her, served under Dr. David Mathews during his time as President of the University of Alabama, and was regarded by many as a mentor and as a truly iconic woman.

The DMC also announced its first-ever recipient of the Jean O’Connor-Snyder Leadership Award — Mrs. Margaret Morton, Executive Director ofSylacauga Alliance for Family Enhancement (SAFE) — who was venerated for her lifetime of dedication to improving her community by empowering others to make a difference.

The evening concluded with a keynote address by Dr. David Mathews himself, who delivered a sobering but hopeful challenge to the audience, and to the center which bears his name:

“Historically, when people reach this point they look around for somebody — anybody — they think will have the strength they lack. But democracies survive for one reason, and one reason only: they find that strength within themselves. Alabamians, too, must recognize they are the people they’ve been looking for.”