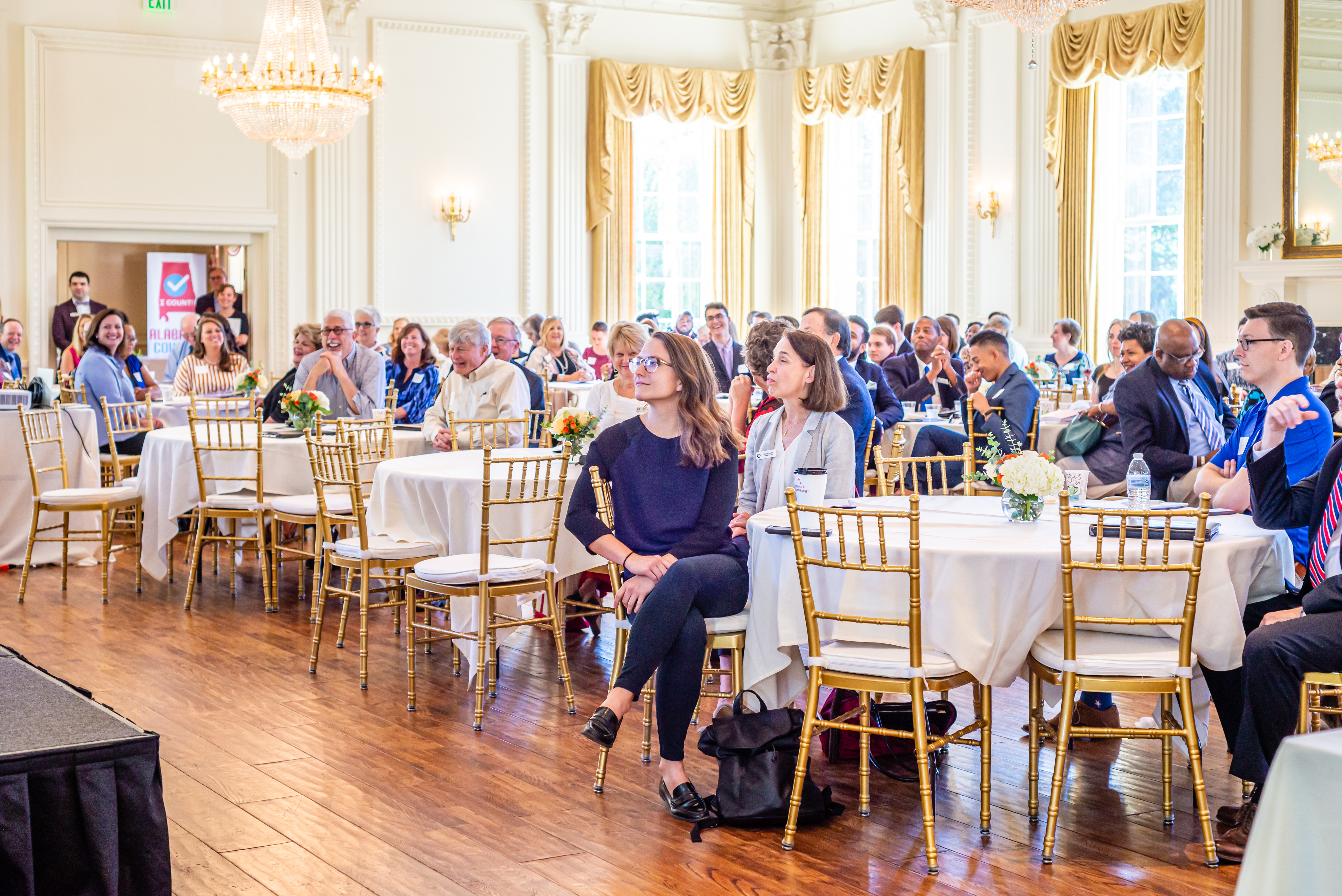 The David Mathews Center for Civic Life held its Annual Civic Institute at the American Village on August 16th, 2019.

The Civic Institute was an all day event uniting and facilitating conversation with leaders from across the state of Alabama about a plethora of topics relating to civic engagement. Following a welcome and opening remarks, the first round of breakout sessions began.

Dr. Mark Wilson, Director of the Caroline Marshall Draughon Center for the Arts and Humanities at Auburn University moderated the panel Inside Out: Strategies for Resisting Disconnection and Crafting Civic Identity in Alabama Prisons including panelists Dena Dickerson of the Offender Alumni Association, Keyes Stevens of the Alabama Prison Arts & Education Project, and Tonya Jones of Women of the Word Ministries. Inside Out explored the responsibility that we all share for welcoming the formerly incarcerated back into the fold of public life.

Inside Out Panel at the 2019 Civic Institute.

The Benefit of the Doubt: Preparing Ourselves for Authentic Engagement and Productive Disagreement discussed how to act–how to let down our individual and collective defenses to bring strangeness closer and become comfortable living with the ambiguity and uncertainty that characterizes community work and public identity. The Benefit of the Doubt panel was moderated by Dr. Hollie Cost, recipient of the 2019 Jean O’Connor-Snyder Award, and Mayor of the City of Montevallo. Panel participants included Tiffany Gibson-Pitts, a member of the Opelika City Council, Jonathan Cellon the Associate Dean of the Center for Student Success at Troy University, Kourtney Frye a graduate student at Troy University, Rebecca Cleveland the former program director of the Mathews Center, and Melissa Youngblood the Assistant Superintendent of Administration and Pupil Services for the Shelby County Schools.

Benefit of the Doubt Panel at the 2019 Civic Institute.

Building a Durable Life: The Impact of Social Infrastructure on Alabama’s Public Health & Civic Life highlighted what is possible when we view health not just as a result of research and medicine, but also as a product of dynamics hidden in plain sight. This panel was moderated by Danny Patterson the Coalitions Coordinator of the Gulf States Health Policy Center. Panel participants included Kristin Boggs the Executive Director of the Albert Schweitzer Fellowship of Alabama, Carol Williams the Contract Prevention Director of Impact Montevallo, Zavier Carmichael and Ninna Mendoza from Project Horseshoe Farm, and Mary Moore the Board President of Sowing Seeds of Hope.

Building a Durable Life Panel at the 2019 Civic Institute.

Geographical Imaginations: The Role of Recuperative Storytelling in Southern History & Identity explored some of the groundbreaking work being done to resuscitate the stories of marginalized voices in Southern history, and examined the narrative structures of feeling that undergird our public and private identities. This breakout session’s panel was moderated by Dr. John Giggie an Associate Professor of History and African American Studies and Director of the Summersell Center for the Study of the South at the University of Alabama. Panel participants included Dr. Hillary Green an Associate Professor of History at the University of Alabama’s Department of Gender and Race Studies, Maigen Sullivan the Director of Development for the Invisible Histories Project, Margaret Lawson a student in the Masters in Teacher Education Program at The University of Alabama, and Isabella Garrison an undergraduate student at the University of Alabama.

Found in Translation: Engaging Communities Across Linguistic & Cultural Barriers, moderated by Nisa Miranda the Director of the University of Alabama Center for Economic Development, included Steve Hamerdinger the Director of the Office of Deaf Services at the Alabama Department of Mental Health, Kim-Lien Tran a Community Health Worker for Boat People SOS, a nonprofit located in Bayou La Batre, Dolly Chavez the Spanish Language Interpreter and Translator for Shelby County Schools, and Leah Dobbs-Black the program supervisor for the English as a Second Language department of Shelby County Schools. These leaders have dedicated their lives and careers to building bridges between disparate people, places, and languages.

Steve Hamerdinger, panelist in the Found in Translation session.

A Public Enterprise:Civic Education & Community Collaboration in Workforce Development discussed active citizenship and civic education as they relate to workforce development. The dedicated Alabamians featured in this session are working in their communities to create programming that prepares the next generation for a successful career and for active citizenship. This panel was moderated by Meredith Smith an Education Special Project Manager with Alabama Public Television (APT). Panelist participants included Deborah Owens the Co-Founder and President of WeeCat Industries, WeeCats Preschool, and Wildcat Industries in Enterprise, Alabama, Joylee Cain the Director of Special Education for Enterprise City Schools, David Wofford the Superintendent of Chickasaw City Schools in Mobile County, Jamie Crouch the Career Coach for Washington County Public Schools, and Jennifer Darby, Ashley Simpson and Kimberly Murray all teachers in Talladega County Schools.

The Public Enterprise Panel at the 2019 Civic Institute.

This year our award recipient was the amazing and inspiring Mayor of Montevallo, Alabama, Dr. Hollie Cost.

The David Mathews Center Board of Directors then announced the renaming of the DMC Civic Fellowship Program to the Robert H. McKenzie Fellows Program in honor of board chair emeritus Dr. Robert H. McKenzie. This program seeks to prepare the next generation for active civic life building upon the successful immersive civic learning model of the Mathews Center Jean O’Connor-Snyder undergraduate internship program. Mckenzie Fellows engage in shared learning on democratic practices, conduct research on public engagement, and support the DMC’s work to strengthen civic life in Alabama.

Dr. David Mathews, President and CEO of the Kettering Foundation delivered the keynote address. Dr. Mathews emphasized the importance of government working with the citizens not just for the citizens during his address. He spoke to the separation between the people of the United States and the government of the United States encouraging citizens to play an active role in democracy.

The afternoon concluded with a panel discussion response to David Mathews’ upcoming publication “With The People”. The underlying idea behind this discussion was based on the democratic ideals that proclaim that our government is “by the people” and that the highest aim of government is to work for the people. Despite high ideals, there is a growing sense that government is neither by—nor for—the people. The panel discussion touched on the discontentment that goes both ways as citizens and elected officials increasingly view one another with distrust. The panel also discussed if there is a better and different way to address the ills that plague our democracy. The panel was moderated by The Honorable Keith Watkins, Federal Judge of the Middle District of Alabama. Panel participants included Terrance Smith, Director of the Mayor’s Innovation Team in Mobile; Kristina Scott, Executive Director of Alabama Possible; Dr. Samory T. Pruitt, Vice President for Community Affairs at the University of Alabama; and Dr. Jarralynne Agee from the Special Project Liaison in the Office for Social Justice and Racial Equity in the Office of the Mayor of the City of Birmingham.

Plenary Panel at the 2019 Civic Institute.

We want to extend a thank you to all 225 attendees, panelists, and special guests who joined us for the 2019 Civic Institute. YOU made the Civic Institute a special, meaningful event!

Katie Tindol is a University of Alabama New College rising Junior who served as a Jean O’Connor-Snyder Summer 2019 intern in Jasper, Alabama. She is now interning at the Mathews Center as part of New College’s Levitetz Leadership Program. Katie is a native of Tuscaloosa, Alabama and is studying Economics and Interdisciplinary Studies in New College. She hopes to attend law school and work in public interest law in the future.